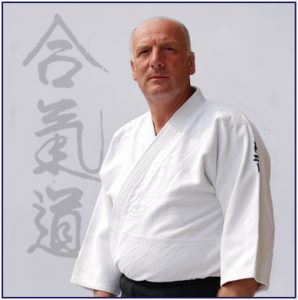 In 1991 Sensei Tony Sargeant parted company from The Institute of Aikido, his original organisation in order to create a school that followed the teachings of Saito Sensei, 9th Dan Aikikai. Sensei Sargeant had been given consent to do this directly from Saito Sensei and was Saito Sensei’s representative in the UK.

Saito Sensei was the Dojo-cho/Dojo Head at the Iwama Dojo (more recently renamed the Ibaraki Dojo) – where modern Aikido was created by O-Sensei Morihei Ueshiba – where he had also been the custodian of the Aiki Shrine.

The organisation has been through a few iterations but is known today as Takemusu Iwama Aikido Europe. From it’s beginnings the organisation has grown to over 500 members in the UK, Russia and Europe. In 1994 Tony Sensei received his 5th Dan Taijutsu (body art) and 4th Dan Bukiwaza (aiki weapons) from Saito Sensei whilst training in Iwama. He was later honoured with the 5th and highest level Bukiwaza award and asked to continue to teach Iwama weapons and to maintain the highest standards for this core element of Aikido.

In November 2002, Sensei Sargeant was delighted to be awarded his Aikikai 6th Dan from the Hombu dojo and in 2006 Sensei Sargeant affiliated with the Takemusu Aikido Association. The TAA are dedicated to the development and dissemination of Aikido based on the highest ideals of the Morihei Ueshiba (O-Sensei) and does this by continuing and promoting the Founder’s traditional teaching and training methods as passed on by his longest direct disciple, Morihiro Saito, Shihan.

In January 2023 resigned his membership and affiliation with the TAA.

Sensei Sargeant is head of Takemusu Iwama Aikido Europe, Greece and Russia and it is his goal to locate and list as many Iwama schools as possible allowing new students to easily find an Iwama club wherever they are in the UK, Europe and the World. This is an on-going project.

We hope to give a wider acknowledgement to all those dojos offering ‘Original Iwama Aikido’, giving them the same status by way of listing and aligning every dojo equally.

All Iwama Aikido dojos strive to keep to the original teachings as passed down from O-Sensei to Saito Sensei, less so the modern ‘flowing’ and stylistically beautiful Aikido more common today, but more as the ‘Budo’ (martial way) Aikido as the the founder intended. That’s not to say that Iwama style Aikido can not ‘flow’, in fact quite the opposite as the Takemusu element of this Aikido is the personification of blending, flowing and controlling your attacker.

Art that embodies mind body and spirit truly holds all the elements of clarity and commitment towards one goal; knowing that if needed it will work, savings one’s life and those of others. And there are those that, having seen films and demonstrations, don’t think Aikido is ‘real’ martial art, which may be explained by changes that have occurred over many years and a possible dilution of the original martial intention.

Iwama Aikido aims to preserve the Aikido released to the World early in the 1940s. We would like you to join us in this preservation challenge, maintaining what we consider to be O-Sensei’s original dream, to make the World ‘love’, and preserve what is precious to us all, to be one with the planet without conflict and bring peace to humanity through Aikido, the way of harmony and spirit.